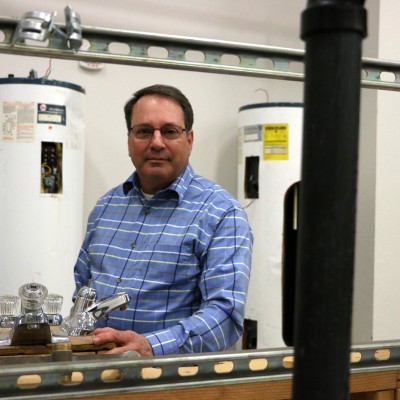 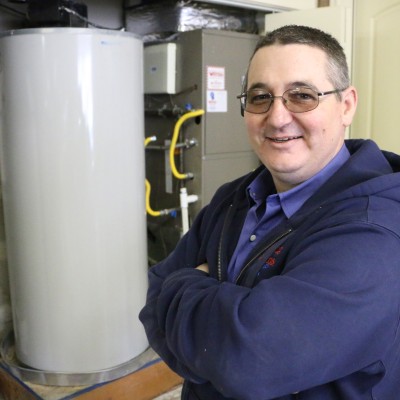 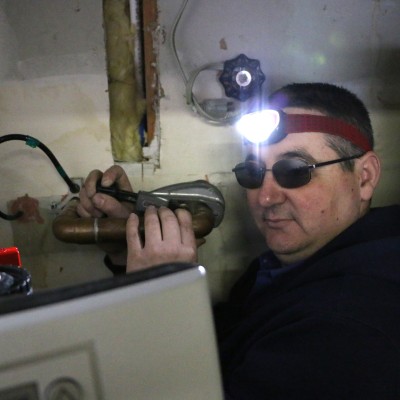 Plumber, Andy Sifford, was carefully maneuvering a 56-gallon water heater with a colleague, in a five-car garage of an Eagle home, making sure not to let it crash on the hood of a yellow Chevy Camero.

Every job is different and unique and that is what Sifford loves about the trade. On this recent winter day, he added a water softener and worked on a water heater. Sifford is in the third year of College of Western Idaho’s (CWI) Plumbing Apprenticeship Program as he is preparing for the Journeyman’s test which he will take at the end of his fourth year.

“You get a great sense of accomplishment at the end of each day,” Sifford said. “A lot of times we go to flood scenarios, at the end, people want to give you a hug. You build a relationship with people, even if it’s a one-time stop, you just changed their life — you could have just saved them thousands of dollars in damages if you prevented more damage from being done.”

Sifford worked a number of jobs including installing satellite dishes after he graduated from Boise State University with a bachelor's degree in History, but he had a difficult time finding a teaching job. He said he was in a bad spot, with student loans and debt when he decided to give the Plumbing Program at CWI a shot.

“In three years, (this trade) has completely changed my life around, from where I was drowning in student loans and a lot of debt. You have to work while you complete the program, so I’m making money and have no debt. I’m actually paying off my other debt from student loans because of the trades,” he said.

Steve Bennett, Plumbing Program Coordinator at CWI, teaches students about residential, commercial, and industrial plumbing. After spending 30 years as a plumber, which included owning his own business, he decided to become an instructor at the College.

Bennett has a passion for plumbing and the history of the trade. He said the word “plumber” was first used during the Roman Empire — plumbum is Latin for lead, the Romans used lead pipes to deliver water. Not only does plumbing save lives, there have been tremendous innovations in both residential and commercial plumbing. There are many aspects of the trade, including steam heating systems, where a plumber never touches wastewater.

“If it wasn’t for indoor plumbing as we know it, then most of our grandparents and great-grandparents would have died in childbirth or from diseases like cholera, dysentery, and typhoid,” Bennett said.

Bennett uses hands-on training techniques to give students a chance to simulate scenarios they will encounter in the field — using labs at the College. The labs have various water heaters, parts, and fittings with a range of tools, so students can work on projects. There is also a lab that simulates a house foundation with a crawl space. Students learn about plumbing theory, the Uniform Plumbing Code, and reviewing blueprints as they work towards becoming licensed plumbers.

“We’re helping people solve their problems, and if an apprentice approaches plumbing like that, they write their own paycheck,” he said.

Sifford enjoys time in the classroom. On a number of occasions, he has taken questions he encounters in the field to the classroom to get answers. He appreciates the perspective he gets from classmates and instructors.

“You’re not just getting a teacher, you’re getting somebody who has worked in the trade for 20 to 30 years,” Sifford said. The instructors were serviceman or inspectors, so you get whole different perspectives and a well-rounded education.”

There will continue to be significant demand for plumbers in the future, with a 24 percent increase in the profession expected from 2015 to 2024, with a median hourly wage of $23, according to data from EMSI.

Sifford feels the trades have been overlooked by students for years.

“I would encourage people, if you're not sure because of financial reasons, you should at least check it out, you can go to the first orientation class and it may change your whole life— it’s changed my life for sure! Even later in life, starting the trades at 34, I’m going to be retiring early and making a good living.”