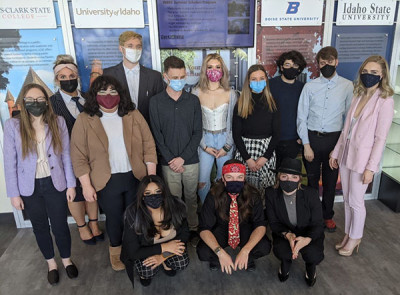 The speech and debate team at the College of Western Idaho is one of the oldest and most successful programs at the institution. As of 2021, the CWI team has earned eight national titles on top of a multitude of regional and conference awards, on top of a significant number of individuals awards each season. Former competitors have even gone on to become Pi Kappa Delta All-Americans.

After graduation, CWI Speech & Debate competitors have gone on to achieve success in a variety of ways. Many competitors go on to compete for university teams, with some receiving substantial scholarships. Beyond competition, our competitors use the skills they gain in their career fields. Some have gone to achiece master’s degrees & doctorates, practice law, and even run for public office. This team has a long and storied history of success, and if you’re interested, you could become a part of that success.

The list of accolades and achievements above might seem overwhelming, but the barrier to entry is likely lower than you expect. You do not need previous experience to compete on this team. You do not need to be a traditional student either. We have had several members find success while raising children, and most competitors work while competing. You do not need to be a communication major. Any type of academic focus can benefit you in this activity.

If you work hard, have an open mind, and a willingness to compete and travel with the team, reach out to the coaching staff below. We would love to hear from you.

Request Interview with a Representative

Congratulations to College of Western Idaho’s Speech and Debate team for earning their 8th national title!

Congratulations to CWI’s Speech and Debate team who took third place overall at their season opener hosted virtually by College of Southern Idaho.

Congratulations to Luke Yeates, College of Western Idaho’s Faculty of Distinction for April 2020.

A Successful Spring Start for Speech and Debate

The College’s Speech and Debate team is enjoying some downtime after a very successful start to the spring tournament schedule.