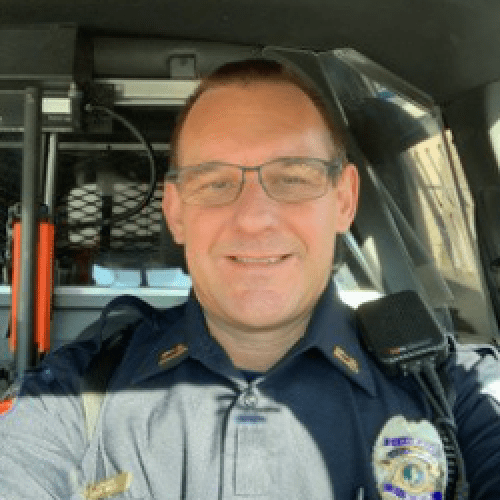 Scott graduated from Central Washington University (CWU) in 1989 with a BA in Law and Justice.  Following graduation, he was hired by the Ellensburg Police Department (EPD) where he worked as a police officer.  While a police officer, Scott worked as a DARE Officer and Detective which provided him the opportunity to earn his MS in Organizational Development from CWU while still working full-time and graduated in 1995.  Scott began teaching for the Law and Justice Department at CWU in 1996 as an adjunct instructor.   He remained on the CWU LAJ staff throughout his entire career as a police officer, teaching 1 or 2 classes per quarter.  He was promoted to patrol sergeant in 2002 and served in that position until he retired in 2019 to take a full-time teaching position at CWU.  Scott was fortunate to be able to serve as the supervisor of the EPD Motor Program where he spent the last 10 years of his career riding a Honda ST 1300.

Scott and his wife chose to move to the Treasure Valley to be with their two children.  Their son is a paramedic for Ada County and their daughter is finishing her PhD in Occupational Therapy.  When Scott is not teaching, he enjoys riding and racing his dirt bike, riding his mountain bike and spending time with his wife and children.