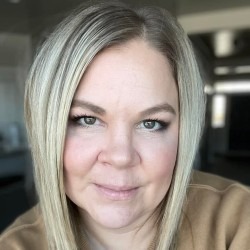 “I remember little things about that class,” expressed Cherri. “It gives me lumps in my throat. I think I had her her first year of teaching and, aside from being the most beautiful thing I had ever seen, she was an amazing teacher!”

Third grade was Cherri’s first year in public school. Growing up in a broken, “messed up” family, she described her 8-year-old self as “painfully shy and insecure”. She recalled never feeling very accepted and remembers the pressure she felt to be like everyone else. She said Miss Gray not only helped her feel welcome, but was always there for her.

“Miss Gray was always happy. She always made me feel good about myself. I had never felt that,” admitted Cherri. “I will never forget it. I would go back year, after year, after year to see her because she had such a huge impact in my life, but have since lost touch with her.”

She said it was Miss Gray who instilled within her, at a young age, the desire to become a teacher.

“Miss Gray was the teacher who made me think, ‘Yes, I want to do this. I want to make an impact in peoples’ lives the way she did in mine,’” she said.

As an adult, Cherri spent a number of years working in the automotive industry.

“I always knew in the back of my mind I wanted to be a teacher,” she admitted, “but I dropped out of college right out of high school… I was really mad at myself, but decided to just get on with my life.”

A few years ago, while working in the service department at a car dealership, Cherri felt it was time for a change.

“While I was making amazing money, I wasn’t happy. I wasn’t living my dream. I needed to fulfill that dream,” she said, “to not only make myself happy, but to be a role model for my daughter.”

In 2010, Cherri started taking classes at CWI and the pursuit of her lifelong dream began.

“I had heard through the grapevine classes at CWI were smaller. This was a bonus for me. I needed that one-on-one interaction to optimize my learning experience,” she said. “It turned out to be the best thing I had ever done!”

Going back to school was not easy. Cherri said she basically had to start over as she had not attended school in over 20 years. Starting out with only two classes a semester, she continued to work full-time, raise her daughter, and take care of her husband.

“It was a crazy, busy, amazing, I wouldn’t change it for anything, time in my life!”

During her third semester at CWI, Cherri quit her job at the dealership and took a job working at a preschool.

“It was something I had always wanted to do,” she said. “I knew it was the first step to a long journey. I took that job at the preschool making only eight dollars an hour. I had to give up a lot of things, but I wasn’t scared. I knew in my heart it would work out.”

Cherri completed her Associate of Arts degree in Elementary Education at CWI in 2015. Following her time at CWI, she transferred to Northwest Nazarene University where she completed a Bachelor of Arts degree in Education and received her Teaching Certificate in 2017. Cherri’s education from start to finish ended up taking her seven years to complete.

“It seems so surreal. I still think about it,” she said. Holy cow! Seven years!! I was in no hurry… the idea was to do well and enjoy the experience and that is what I did!”

Although Healea felt like quitting numerous times along the way, she said her daughter, husband, family members, and friends at church were her biggest cheerleaders.

“Their support drove me to work harder and not give up,” she said. “You don’t know what’s at the end of the road until you travel it. You just have to go and follow that dream and weather the storms... there is a rainbow at the end.”

This past August, her lifelong dream to become a teacher finally became a reality as she began her first year of teaching in a second-grade classroom at Greenhurst Elementary in Nampa.

Cherri looks forward to having a class of her own and a chance to change lives through her teaching. Additionally, she said she is thankful for opportunities along the way that helped lead her to this point.

Sitting in her new classroom, preparing for her young students and her very first year of teaching, she, again, was reminded of the impact of her third-grade class and her beloved teacher, Miss Gray. Cherri hopes someday to have the opportunity to tell Miss Gray of the enormous influence she was in her life.

“Miss Gray, I just want you to know that you are the sole reason I became a teacher,” Cherri said with tears in her eyes. “I hope that I can be only half the teacher that you were to me.”

For an update on this story, watch the 7's Hero story on KTVB.