With more than 42 years of public service including 31 years as a law enforcement officer, College of Western Idaho (CWI) Law Enforcement Program Director and retired Nampa Chief of Police LeRoy Forsman has plenty of connections around the Gem State. Through those connections he often hears about vacancies and openings in law enforcement departments, specifically in smaller, rural areas.

“A lot of these agencies that have six- to eight-person departments have one or two openings,” said Forsman. “You’re talking about them being down about 15%, and somebody has to cover those shifts.”

As law enforcement agencies across the state of Idaho grapple with staffing shortages, Forsman looks to provide relief by training potential recruits and getting them prepared for action through the College’s Law Enforcement program.

“My expectation of the program is to provide the best training possible and prepare students to go out and be successful in whatever they do,” Forsman said.

The program was built in the fall of 2015.  Forsman said the intention behind its creation was to give the Treasure Valley and agencies from surrounding areas another option for potential recruits to apply and have a leg up. Typically, agencies must send new hires through the Idaho basic patrol or detention academies at the state training facility in Meridian within one year of hire.  Additionally, four of the largest agencies in Idaho provide their own in-house academies.

CWI’s program offers two areas of studies — patrol and detention officer. The program has been approved by the Idaho Peace Officer Standards and Training (POST) Council and eliminates the graduate's need to attend the basic police academy before taking the certification exam.

“We do the training upfront rather than the agencies having to hire student and then pay to send them away for several months to get trained,” Forsman said. “The students get education, in both patrol and detention, then they can go to work for agencies right away.”

Students in the program must also go through a polygraph test, background check, and other vetting processes they would if they were hired on at a department.

“We hope to pass on experience,” Forsman said.

From having students go through physical training to bringing in officers to share personal stories of what can go on in the field, Forsman said this program offers a good idea of what this career is like and if it is for them in the long run.

“I teach a class specifically on career survival, the importance of relationships, and how it can affect you and your family. To be very honest, over the years I’ve had students who meet with me after class and said, ‘I don’t think this is what I want to do,’” Forsman said. “We’re fine with that. I’d much rather they find out sooner, rather than in two years, this isn’t what they want to do. We don’t hold back, we don’t hide anything, and we want them to know exactly what they’re going into.” 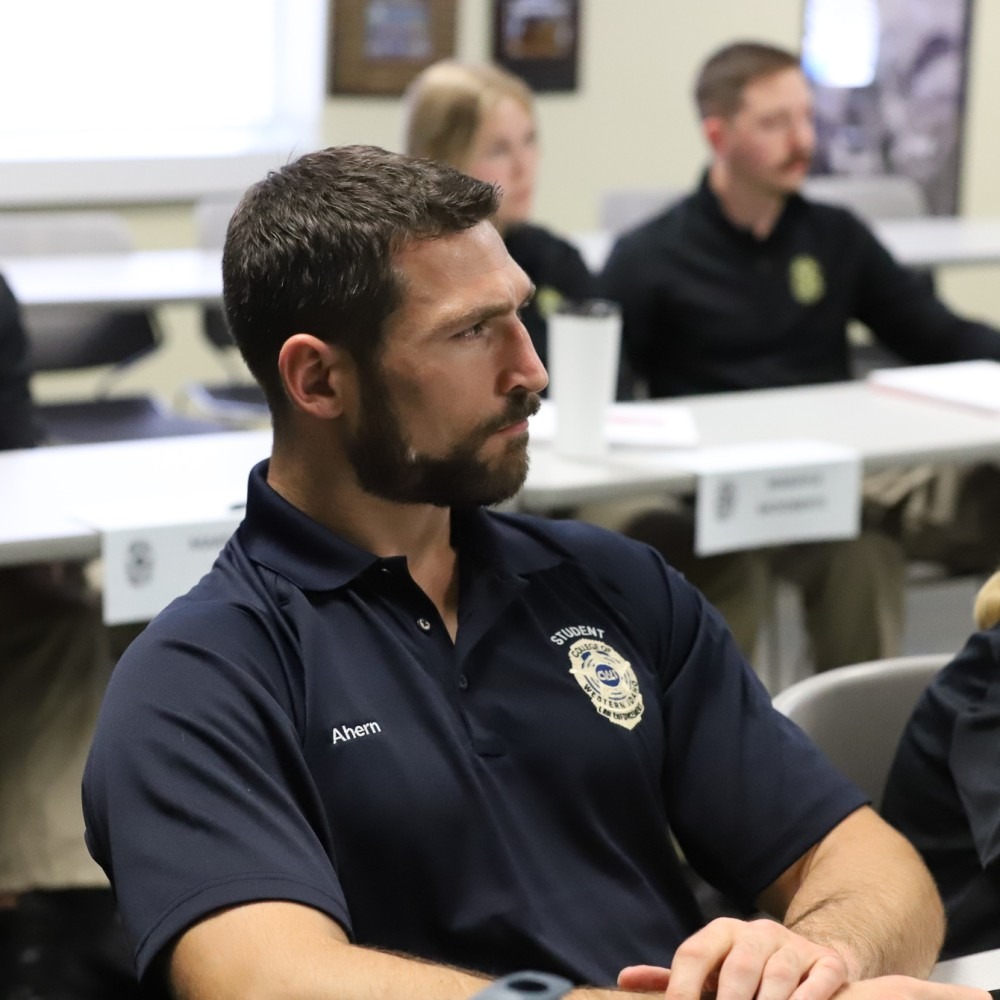 “I feel like I have finally found the career of my life, I am excited to start work once I graduate,” said Ahern. “I am ready to go.”

Ahern comes to CWI at 31 years old. He previously spent six years in the Marine Corps, which he says has helped shape him and prepare him for this program through disciple, physical fitness, and creating a tactical mindset.

“When you are out on the job, you’re able to think things through in a tactical manner so you can be effective both for your own safety and the safety of the public,” Ahern said.

For Ahern, the decision to now pursue a career in law enforcement is an easy one. For one, he can’t see himself doing a desk job — he said he needs to be out and about. Two, and one his biggest reasons, he has a passion to help his community.

“I have a deep desire to help people, and I have always wanted to be someone people can rely on,” Ahern said. “There is no better way to help the community and to help others in need than be a first responder because you are the first thing people think of during the worst moments of their lives.”

His decision to come to CWI and apply for the Law Enforcement program was also an easy one. From his own experience, he knows how long the hiring application process can be for an agency, with the interview process, polygraph tests, physical examinations, and more. He also said there could be other candidates who may have some experience already he may have to compete with.

Ahern knew he needed to stand out.

“While you aren’t guaranteed to be hired on by a department, CWI gives you the training and certification to apply and pretty much start work right away if you are hired,” Ahern said. “Departments, a lot of the time, prefer that because when you get hired on by a department, not only do they have to pay for the academy training, but they must pay you while you're going through the academy. So, agencies hiring recruits from this program get to save money, they get an officer who's trained, and they can pretty much put you right into your probationary field officer training (FTO) phase.”

There are some agencies who still require recruits to go through its own police academy training, but Forsman said students coming from CWI are able to “fly through it.” He added it is more of refresher course for CWI graduates.

CWI has partnered with every law enforcement agency in Idaho for the past three years to allow officers to gain college credit for the academy training. The Boise Police Department (BPD) recently made the decision to work with the College and take advantage of this program for their officers. Detention officers who have completed a state academy can apply for 12 credits while patrol officers can apply for 18 credits. These credits can help an officer move to a higher state certification level, promote sooner, or achieve a higher pay grade within their agency.

While applications for the Law Enforcement program do not open until January, Forsman said people interested can still get in touch about recruitment now. Because of how much paperwork and background processes there are, Forsman encourages those interested to get in touch as soon as possible.