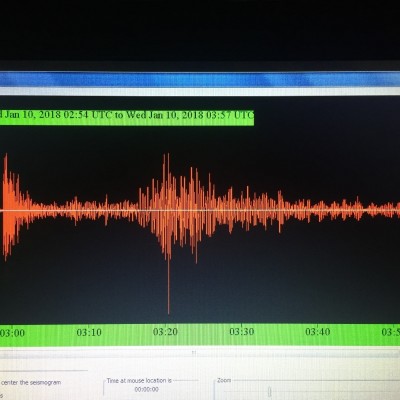 Did you feel the earthquake in Honduras on Tuesday, Jan. 9? Likely not, but the seismometer located at College of Western Idaho’s (CWI) Nampa Campus Academic Building did!

When an earthquake occurs, seismic waves travel through the body of the earth. As the waves travel, their wavelength lengthens and their amplitude decreases, just like sound waves. By the time the seismic waves travel 2,500 miles to Nampa, Idaho, they are far too small to actually feel. CWI’s seismometer is “tuned” to detect vibrations with a specific frequency, such as those from seismic waves.

During the earthquake this past Tuesday, it took just about ten minutes for the waves to travel from Honduras to Nampa! Not only did the seismometer clearly capture the earthquake, the patterns of distinct wave types could also be observed. When energy is released in an earthquake, many different types of waves are produced. Of the waves that travel through the earth, we see two wave types; compressional waves (similar to sound waves, push-pull) and shear waves (similar to water waves, up-and-down or side-to-side). Analysis of these types of wave motion has resolved that compressional waves travel about 1.7 times as fast as shear waves. In our event signal, we can distinctly see two “pulses” which represent each wave type. The time between waves can be used to determine how far away the earthquake occurred.

College of Western Idaho Anthropology Club, School of Arts and Humanities, School of Social Sciences and Public Affairs, and Inclusive Excellence Committee are hosting former Chairman of the Northwestern Band of the Shoshone Nation Darren Parry in an evening of remembrance on Wednesday, Feb. 8.