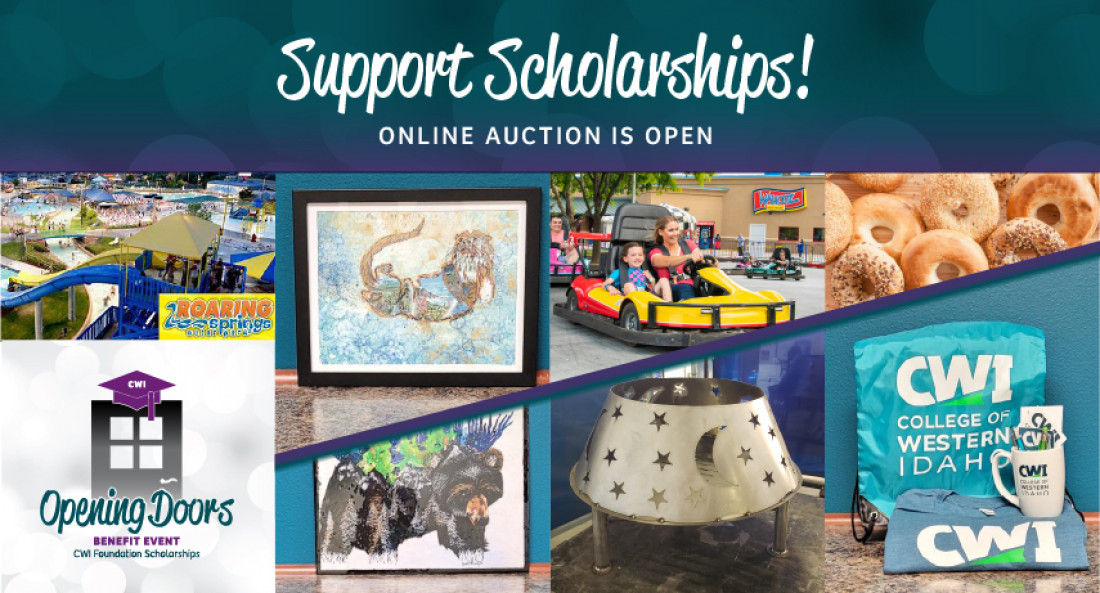 Support our students by taking part in the 2021 Opening Doors Benefit Event! This year’s online auction is better than ever! From new CWI swag, to one-of-a-kind art and fire pits created by students, and bagels for a year – there is something for everyone! Whether you have $10, $100, or more, your donation can help students’ dreams become a reality. Visit cwi.edu/OpeningDoors to start bidding!

Congratulations to Robert Trinidad, Center for New Directions Coordinator, and Adult Education Data Entry Specialist, Sandy Leonetti, who both guessed closest to the number this past week winning themselves a pair of tickets to the Boise State vs University of Nevada Reno tomorrow night!

Be sure to read next Friday’s issue of CWI News for your chance to win tickets to the Boise State vs Air Force game on Oct. 16.

Congratulations to Dan Garrity, College of Western Idaho’s (CWI) Faculty of Distinction for September 2021. Garrity is an instructor in the Communications and Marketing department and has been teaching at the College for three years.

Garrity’s career path began at 22 when he enlisted in the United States Air Force and was given a series of tests to determine which career field he was best suited for. Through the testing, he learned of his aptitude for language acquisition and chose to learn Russian.

“I chose Russian because I wanted a huge challenge; something that was so 'foreign' to me that I'd have to use everything I had to get good at it. I became an airborne Russian Cryptologic Linguist, flying combat reconnaissance missions for three years during the Cold War.”

While continuing his nine years of service in the Air Force, Garrity began paving the way for a career in television. Along with earning a bachelor’s degree in Broadcasting from Northern Arizona University and a master’s in Communication Leadership from Gonzaga University, he spent 15 years gaining real-world experience in broadcasting.

“I began as a videographer in San Angelo, Texas, one of the smallest markets in the country. Once my service commitment was over, we moved to a mid-sized market in Spokane, Washington, followed by a top-ten market in Seattle where I was a reporter. I ended my career in professional news as Managing Editor of the CBS and NBC affiliates in Spokane.”

His television career took a turn toward education while working as the Managing Editor of an NBC station in Spokane.

“Gonzaga University was in need of an adjunct professor, and I jumped on the opportunity. Leaving the newsroom two days a week to teach, I quickly realized Tuesdays and Thursdays were my favorite days of the week. It was such a joy to witness students’ discoveries of their own unique gifts. I felt like I had something that could assist them in achieving their goals.”

Garrity became the Director of Gonzaga’s Broadcast Studies program in 2001 where he worked until crossing paths with former CWI Department Chair, Michelle Bennett.

“From the first meeting I had with her, I could feel her investment and commitment to students. She loved her students, she loved her colleagues, and you could tell. The best discovery was, Michelle wasn't alone. The culture of care she helped to create at CWI lives on in a big way. Our faculty legitimately care about and for each other, and the bulk of our resources are devoted to the student experience. I'm so lucky to be here, and I'm proud to tell people I am part of CWI. I have been privileged to accompany some amazing students on a formative part of their journey. No matter how much they learn from me, they have most certainly taught me more.”

“Dan throws you so far outside your comfort zone you are inspired to push harder and into new kinds of innovation you didn’t realize you were capable of,” said 2020 graduate, Justina Sexton. “By sheer grit and raw creativity, he taught me to go beyond the ordinary to step out into the extraordinary.”

“Dan’s devotion to quality instruction, celebrating his peers and school, and building community among our students is second to none,” said Jim Gatfield, Associate Professor and Communication, Media Arts, and Marketing Department Chair. “Dan’s presence in the classroom is transformative for students. In less than three years as full-time faculty, he has spearheaded multiple major projects giving students hands-on experience that will stay with them forever. He is effortlessly enthusiastic in his devotion to celebrating those around him. Quite simply, every college and university should hope to have faculty like Dan Garrity.”

Deeming himself the “luckiest husband”, Garrity and his wife have been married for nearly 40 years. The couple has three grown and married daughters and five grandkids.

“I'm the slowest triathlete in the Treasure Valley, and I love to golf. You'll probably beat me at that, too. I'm also crazy good at Jeopardy when I can pause the DVR as long as necessary.”

The College of Western Idaho (CWI) Foundation will host its eighth-annual Opening Doors Benefit Event. Plan to join the CWI community as we raise money for student scholarships.

This year’s event will kick off with an online auction. Bidding for the auction opens Wednesday, Sept. 29. In addition to the auction, the CWI Foundation will host a livestream event Wednesday, Oct. 6, from 7 – 8 p.m., which will recognize donors and scholarship recipients, highlight programs at the College, and feature a message from special guest, Tommy Ahlquist.

Registration is now open! Register early to be entered into prize giveaways, view and bid on auction items, and receive updates. This year's auction includes skiing in Sun Valley, a cruise to Alaska, a trip to Ireland, and more!

Contact the Foundation at 208.562.3159 or foundation@cwi.edu for more information and ways to get involved!

Are you a College of Western Idaho student interested in learning more about transfer options? Connect with different colleges and universities, and discover various transfer opportunities available to you during the College’s Fall 2021 Transfer Fair!

Representatives will be on-campus to discuss programs, majors, and transfer requirements. This one-day event will be held at two campus locations Tuesday, Oct. 12, in the morning and afternoon.

Unable to attend? Access the Transfer Fair virtually via Blackboard in the MyCommons section at any time throughout the semester!

Contact Brittney Hernandez in Student Advising and Success at brittneyhernandez@cwi.edu with questions or for more information.

Free, mobile COVID-19 vaccination clinics will be available at College of Western Idaho (CWI), in partnership with Saint Alphonsus and Micron, during the month of October. The clinics will be open to students, employees, and members of the community ages 12 and over.

CWI employees wishing to participate in the clinics are asked to communicate with their manager for pre-approved release time.

According to guidance provided by the Centers for Disease Control and Prevention (CDC), COVID-19 vaccines are effective at helping protect against severe disease and death from variants of the virus that causes COVID-19, including the Delta variant. To learn more about COVID-19 and the vaccine, visit the CDC site.

Contact CWI Dean of Students, Chad Trisler, at chadtrisler@cwi.edu with questions or to learn more.

Welcome to the following individuals who are new to the College. We are happy to have you here and look forward to working with you!

Employees can access Internal Job Postings or visit Careers at CWI to view all external listings. Upon application submittal, you will receive a confirmation email. If you do not receive an email, check your "Junk/Spam" folder, then email recruiter@cwi.edu to verify receipt of your application.

Note: This is the official communication newsletter for the College. Content is driven by contributions gathered from all areas of CWI. If you have news you would like to submit for this, please use a Marketing Help Desk ticket.