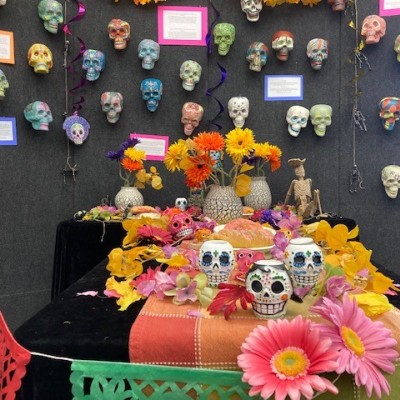 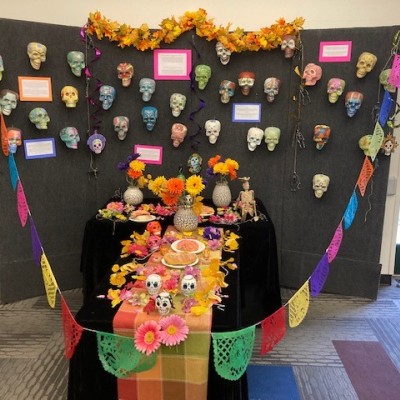 A tradition College of Western Idaho (CWI) Associate Professor of Spanish, Janel Holt, has incorporated with her students since 2014 is back after a two-year hiatus due to COVID-19. Holt and her Elementary Spanish class (SPAN 101) celebrated the Mexican tradition of Día de los Muertos, or known as Day of the Dead, by constructing an altar and placing ofrendas, or offerings, to memorialize those who have died.

In the weeks leading up to Día de los Muertos, which is traditionally celebrated Nov. 1 and 2, Holt’s students learn about the rites, traditions, and beliefs connected to Day of the Dead in Mexico.

Students then paint skulls, which is an activity central to the celebration, and they exhibit them here on the altar, another important element of the holiday. They also translate passages explaining the customs of this holiday from Spanish to English, which are displayed on the altar.

“As Spanish instructors at CWI, we try to incorporate culture into our classes whenever possible,” Holt said. “Painting skulls is a great way for students to connect to the practices of the festival as well as compare attitudes surrounding the concept of death in Mexico and the United States.”

Holt enjoys sharing information about Day of the Dead each year because of how festive, unique, and popular it is with students. She believes teaching her students about cultures and traditions encourages them to look into their own more.

“It can be very difficult to understand your own culture without the lens of comparison. By exploring these customs and celebrations, students not only learn about the practices of other countries or regions, but they can also begin to question and experience a deeper understanding their own.”