Seven Students Go Above and Beyond, Receive Associates Degrees When Graduating High School 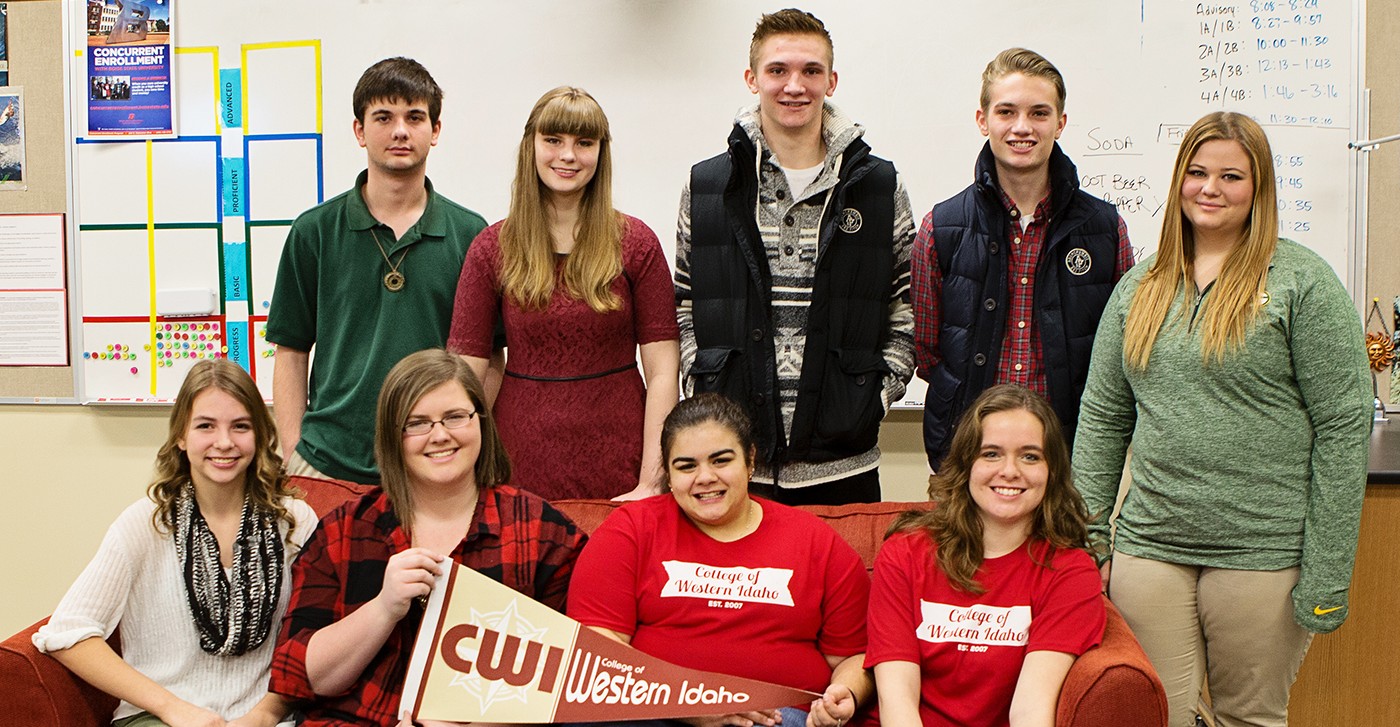 Those students, like others around the state, are able to earn both high school diplomas and college diplomas at the same time due to their participation in the state’s Advanced Opportunities programs, administered by the State Department of Education.

Advanced Opportunities involves four distinct but related programs where the state reimburses all or part of the costs to help students graduate early or with significant college credits already in hand by the time they leave high school. The 8-in-6 Program allows students in grades 7-12 to take summer and overload courses. Fast Forward is available to high school juniors and seniors to help them pay for dual credit courses—classes that count both for graduation and as college credit. As part of the Early Completers Program, students who have completed state graduation requirements (except for senior-only courses) can use state aid to pay for dual credit courses. And students who wind up graduating from high school at least one year early, are eligible for a scholarship of roughly $1,400 to an Idaho post-secondary institution of their choice under the Mastery Advancement Program. The state spent $3.5 million on subsidies and support for those programs last year, but only 29 percent of the eligible students took advantage of them.

For the eight students at Vision Charter School, all of whom have used one or more of the Advanced Opportunities programs, the state has already saved them and their parents thousands of dollars in college credit costs.

One of those eight students is Samantha Snow, who will be 17 when she graduates with two associates degrees from the College of Western Idaho this spring.

Her older sister, Keely, who helped pave the way for high schools students earning college degrees at Vision Charter, is believed to have been the youngest graduate at the time from CWI when she graduated two years ago after just barely turning 17. Today, she is a chemical engineering major at the University of Idaho and she credits the associates degree she earned through the Advanced Opportunities Program at CWI while in high school as helping her reach graduation a year early in what is normally a five-year program. It not only helped clear away many of the “survey” courses students seeking a bachelor’s degree must take, but, she said, it helped expose her early to the rigors of college classes, from the extra homework and the need for self motivation, to effectively planning for classes to meet graduation requirements so as not to waste time or money.

The parents of those two girls estimate that the savings due to those opportunities saved them an average of about $7,500 over the years that were needed for each girl to earn their associates degrees. According to officials at the State Department of Education, the state spent $15,746 dollars at Vision Charter School just last year for 8-in-6 and Fast Forward programs alone.

Stephen Crumrine, director of dual credit programs for CWI, estimates that 20,000-22,000 credits that will be earned at CWI from approximately 4,000 high school students using Advanced Opportunities with the school, “and I imagine you’re looking at similar ratios with the other two-year colleges in the state,” he noted, all of which have embraced offering dual credit programs, along with the state’s universities. “We know that students (in high school) who earn college credits have a much higher ‘Go On’ rate,” he added. The state has set a goal of having 60 percent of its high school graduates go on to achieve post-secondary degrees or technical certifications.

At Vision Charter School, utilizing the Advanced Opportunities programs is a major point of emphasis for their secondary students, according to Principal Wendy Oldenkamp. In fact, all of her high school’s teachers are qualified to offer dual credit classes, so while some of the Advanced Opportunities students spend part of their school day to attend classes on the CWI campus, others can earn college credit at the charter school itself, as well as taking on-line courses from approved colleges and universities.

That emphasis began even before the state launched its Advanced Opportunities programs, according to David Snow, one of the trustees at the school, which promotes itself as being a college prep school. “We felt if students had an opportunity to go to college in high school, they had a better chance of earning a college degree.” So, utilizing community resources and fundraisers, they raised money to try to offset some of the costs of those college credits. Even when the state came along with the Advanced Opportunities programs, they continued those fundraising efforts, helping students pay for college costs  ranging from books to college application fees. “We wanted to leave as few barriers as possible for students to overcome” in their efforts to earn a college degree, he said.

Each of the students at Vision who will earn associates degrees this year agreed that parental support played a key role in getting them involved, and then following through, with the Advanced Opportunities programs they used. They all agreed it took dedication to complete the programs. “You have to be a motivated student,” said Samantha Snow, but at the same time, she added, “it’s an incredible experience. You shouldn’t pass it up. There’s no reason not to get your associates degree.” Or in her case, two of them, one in Liberal Arts and one in History.

Mitchell Dial, who will graduate in January, only a few months ahead of his brother, Jackson, who is 15 months younger than he is, said it was their mother who “saw the potential and opportunity in the program and got my brother and I started on it. We owe it all to her.”

He had to give up summer basketball and a few other things he enjoyed to get all the work done, but he said it was worth it. He got a chance for internships with the Caldwell Public Works Department and with a local architectural firm, and that helped him decide whether he wanted to go into civil engineering or architecture. In addition, “I want to go on a mission for my church,” he said, “and by getting my first two years of college done now” with his CWI associates degree, “I won’t fall behind” with his peers in graduating from college.

“I’m not going to lie,” Alex Kearsley said. “This program is incredibly hard. But the hardest part for me was balancing college and high school and still getting my work done for both.”  She still found time, however, to hold leadership positions in both her school and her church, to be a volunteer at Zoo Boise, take part in the school’s drama programs and be a housekeeper for her grandmother.

In fact, the resumes of all of the Advanced Opportunities students from Vision who will be graduating from CWI this spring show students who are often involved in school extra-curricular activities and their community, despite the extra work the college classes require. For example, Owen Newton is the secretary for National Honor Society, does tech work for the drama productions and helps coach the elementary robotics team. Cassandra Cuttlers also is a member of National Honor Society. Maddie Nelson is a former student government president and serves on the Middleton Mayor’s Youth Advisory Committee.  Darbi Tackett, who will be 17 when she graduates with honors from Vision Charter, will also earn two degrees this spring – in Liberal Arts and in Political Science – from CWI.

And those first few classes on a college campus can be unnerving. Jackson Dial, who will graduate this spring from both Vision and CWI shortly after turning 17, said that when he first started taking dual credit classes on the CWI campus,  “everybody was so much older than I was. I was surrounded by adults --  and that was a little intimidating. Another class I had, I wound up sitting next to the ‘mom’ group,” a reflection of the fact that junior colleges often serve a wide age range of students. Still, he said with a quick grin, “I have a mom, so I could relate a little.”

Hannah Martinez Samuelson, who began with the 8-in-6 program, probably could have graduated with honors early, but chose to stay for her senior year to “enjoy the experience,” she said.  She participates in the school’s robotics programs, its poetry group, its musical theater and drama programs, student government, National Honor Society, the swim team, intramural volleyball and is a math tutor, among other activities. Meanwhile, she’s getting her associates degree, which she said “has allowed my family to save a great deal of money, has shaved about a semester off my intended Bachelor of Science degree in engineering, and has made it more feasible to seek minors, like mechatronics, and also to study abroad, all of which are goals.

“This opportunity offers a head start on your goals,” she said. “I feel more prepared heading into college…. I would hope that every college-bound high schooler in Idaho would take advantage of this program.”

For more information about the state’s Advanced Opportunities programs, contact your local school’s guidance counselor or go to the State Department of Education website at http://www.sde.idaho.gov for more information.