Road to Nationals: Preparation and Teamwork 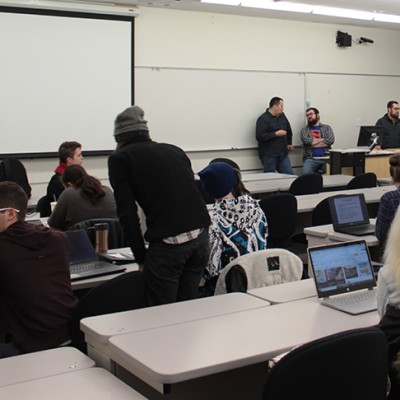 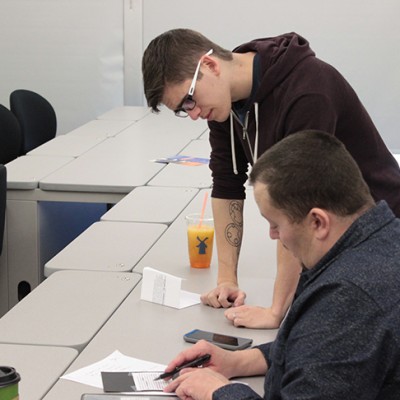 Hard at work during a Friday practice at the College of Western Idaho (CWI) Nampa Campus Academic Building, Bryce Funkhauser of the College's Speech and Debate team fine-tunes his dramatic interpretation (DI) speech he has been working on for months. In a moment of passionate acting and memorization, he recites a beautiful piece entitled, “Elevator to Salvation”, written by Brad Lawrence. Preparation is key in development of his national caliber performance at the Pi Kappa Delta National Comprehensive Tournament held in Nashville, Tennessee, March 14-17.

Each competitor brings different strengths and talents to the team, teaching and assisting each other along the way. Coach, Mark Galaviz, lends his expertise as a former national champion speech and debate competitor to Funkhauser. In turn, Bryce assists fellow team mate, Garrett Ellison.

“We bounce ideas back and forth to get fresh eyes,” said Funkhauser. “After staring at it for a while, it’s difficult to see new things to improve.”

“The team sets aside numerous clinic hours every week,” said Jim Gatfield, Director of Forensics. “We are successful because we work together so well.”

Selecting a dramatic reading brings a different feel and suspense to the audience. Standing center stage, preparing the voice of their character, a small, black binder is pulled chest high. Opening wide before speaking, the authors' characters come to life in this storytelling event. The pages in the binder represent the author's words, interpreted in a DI speech.

"A page turns as an indicator for an audience a new scene is beginning and symbolize progression in the piece,” said Funkhauser, speaking of the purpose and meaning of the binder. “It has my entire speech in it, and I might look down in case something happens. The best is when you can look down just as the judge is not looking at you,” he jests.  

Practicing a piece for a period of two months up to a year may seem repetitive; however, it is the work of champions.

“They are trying to make the piece (speech) as perfect as it can be. There is no main structure change now,” Gatfield explains. “We make sure the time is consistent, memorization is sharp, and tweak small things. Taking a piece that is done and smoothing it down till it’s as fine as it can be. Students select  a piece that speaks to them. It can be kind of cathartic seeing the characters come through.”

Of great importance to a busy Speech and Debate team is staying healthy and keeping up on their studies. In the form of  fatherly and passionate advice from coaches to help the team prepare for Nationals, Galaviz said, “We are with you.”

Drink water, take a nap, eat something that is healthy," Gatfield exclaimed.

As the team moves forward on their road to nationals, the picture comes sharply into focus. Motivation, hard work, irreplaceable contributions from coaches and veteran members of the CWI Speech and Debate team, such as   Funkhauser. In the end, the individuals on this team are amazingly talented and hard-working individuals.

Andrew Carnegie, a well-known business magnate, once said, "Teamwork is the ability to work together toward a common vision. The ability to direct individual accomplishments toward team objectives. It is the fuel that allows common people to attain uncommon results."

With a common vision of success at the national level, CWI's Speech and Debate team can channel their energy to help guide and lift each other along the way in Tennessee at Nationals.

Keene, a student in CWI's Communication program, is following the Speech and Debate team's road to nationals as part of an internship for his Communication Capstone class.