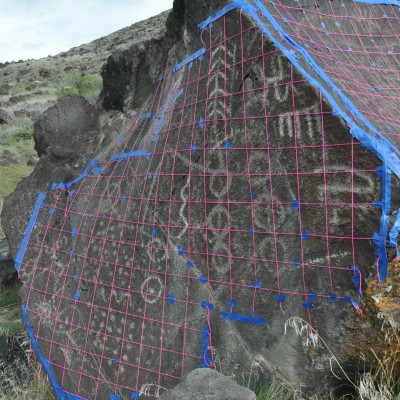 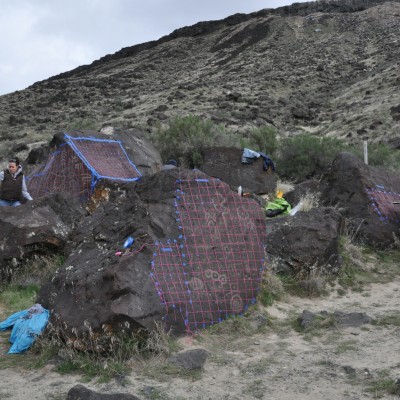 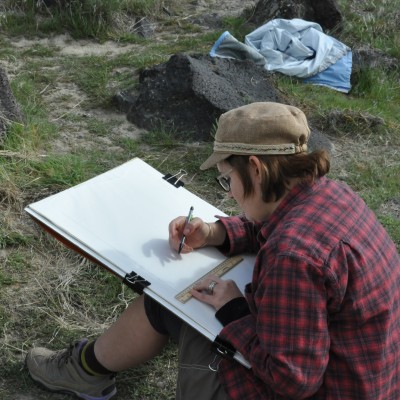 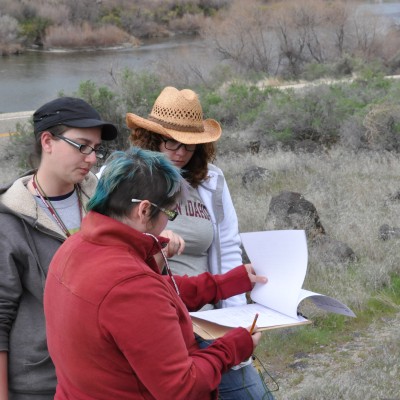 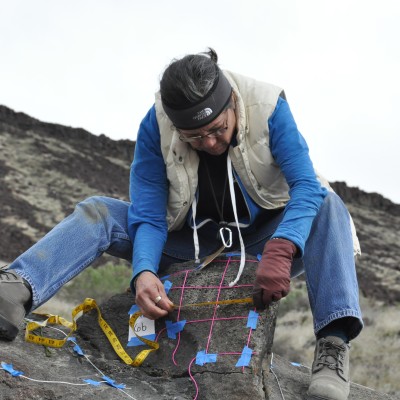 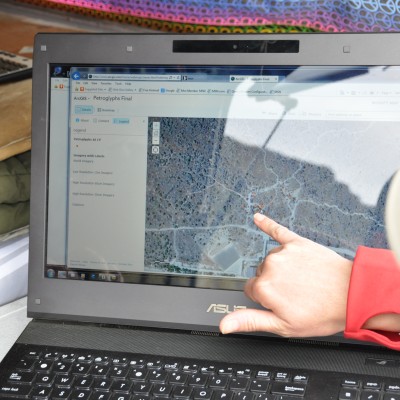 A group of College of Western Idaho (CWI) students are expanding a local research project to make their work accessible to the global anthropology community. For the second consecutive year, the CWI Anthropology Club spent part of Spring Break (March 20-25) along the Snake River mapping and recording petroglyphs.

Twenty-three students helped locate and record glyphs near Melba, Idaho; at Map Rock proper and the Fish and Game Map Rock Access site. Their field work included documenting coordinates and measurements, taking photographs, and sketching the glyphs. Research this spring was funded in large part by a grant from the Canyon County Historic Preservation Commission and County Commissioners.

“It is such an amazing opportunity to be involved on the ground floor of a project of this magnitude,” says Anthropology Club President and Project Coordinator, Audrey Chapman, who has participated in all three semesters of the research. “To help collect data that will be used for international research is incredible.”

Sue Roberts, a CWI alum and current Boise State University student, has played a crucial role in expanding the project by inputting the recorded data into an online spatial database called ArcGIS. Roberts says that by doing so, people from all over the world can access the GPS coordinates, measurements, photos, and sketches  recorded by the group. Her contribution originated as a GIS class project at CWI, but has taken on a life of its own.

“I wanted to do something for future generations,” says Roberts. “This project is a way to preserve history. That was the idea behind making the map.”

In addition to recording petroglyphs, the students have been involved in documenting some important new findings at Celebration Park. Last fall the students discovered several ancient hunting blinds and an extensive rock wall, none of which were previously documented. A wildfire last summer helped reveal the new findings which continued to be researched this spring. The project has also allowed the students to record vandalism found on the rocks, which will help track criminal activity surrounding the artifacts and preserve the images as they currently are for future researchers and the public.

“This opportunity has been tremendous for our students,” says Nikki Gorrell, Anthropology Club Advisor and Project Director. “The experience is providing a really valuable component to their education, giving them a chance to take anthropological theory and methods out of the classroom and into the field.  Along with contributing to a legacy project, they are also learning teamwork, leadership, problem solving, and critical thinking.”

Gorrell says this year’s participation increased by six students, including the addition of four members of the Boise State University Anthropology Club. Students are selected for the project through an extensive application process. The research is being conducted according to American Rock Art Research Association guidelines and is part of a multi-year collaboration with the Canyon County Parks, Recreation and Waterways department.

CWI students will be recognized for their efforts in May at a gala honoring the 25th Anniversary of Celebration Park. As part of the event festivities CWI Anthropology student, Allie Goeckner, will premiere her documentary film on the petroglyph project.