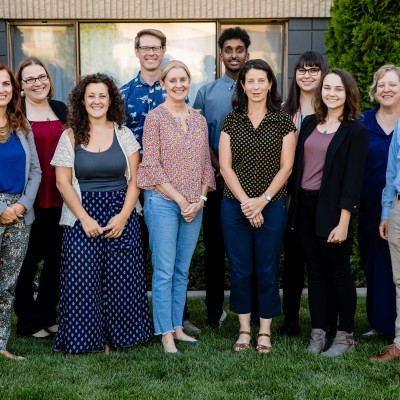 Congratulations to College of Western Idaho (CWI) INBRE students, Charity Watson and Brandi Sweet, who won third place in the INBRE Scholars category for their work examining the physiological effect of social media on people.

Eight students participated in this year’s INBRE Scholars program. Students earned $1,500 for their work and the experience gave them a chance to immerse themselves in scientific research for three weeks. Two groups examined heart rate as the physiological factor, and two groups examined the stress hormone, cortisol, as the physiological factor, and then looked at additional modifying factors such as age and gender.

During the INBRE Summer Research Conference in Moscow from July 29 to 31, students shared their research and exchanged ideas with students and faculty from institutions throughout the state. Suzanne Oppenheimer, Assistant Professor of Biology, said the networking and research opportunities are significant because it prepares students to transfer to science programs at four-year schools.

“I just love the fact that we get to do research and explore something new, it's not a traditional lab class where the outcomes are known,” said Oppenheimer. “Having to think and solve problems we encounter during this research is important to the development of our students.”

According to Oppenheimer, their study found 20 minutes of social media use, with Facebook or Instagram, did not cause stress; instead, it reduced stress levels, as measured by cortisol levels and heart rate.

SCORE Big Hits It Out of the Park

College of Western Idaho took over Memorial Stadium in a BOLD way Thursday night during CWI Night at the Hawks raising more than $1,000 for scholarships.

Do you own a business, have a service or hobby you can share, or know someone who does? The College of Western Idaho Foundation would love to connect with you!

Hands-on training opportunities for Automotive Technology students at College of Western Idaho have been elevated thanks to a donation of two Ford F750 trucks.

Enjoy a night at the ballpark, and support students at the next CWI Night,Thursday, June 16.

A generous donation from the non-profit organization, S.E.E.4VETS, will fund six, $1,680, scholarships available to eligible veteran students at the College.