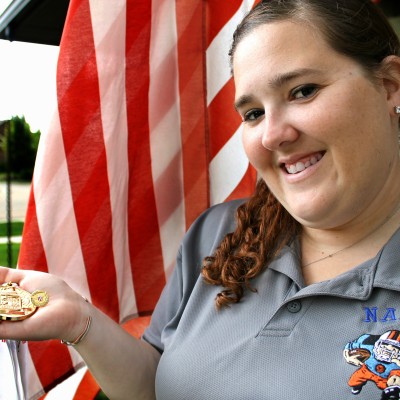 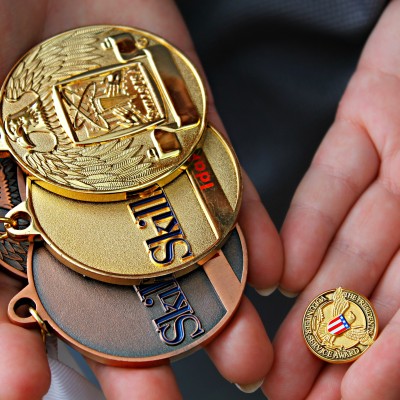 A recent graduate from the College of Western Idaho (CWI) is being honored with a national recognition that is a first for Idaho. Nampa resident Lisa Webb, who graduated from CWI’s Drafting Technology program in May, has received the state’s first President’s Volunteer Service Award through SkillsUSA. Webb volunteered more than 500 service hours this past year—making her one of 74 SkillsUSA participants nationally to receive the gold award.

Webb served the majority of her volunteer hours with the Nampa Optimist Football program, while also enrolled as a full-time student at CWI. She served in a number of capacities with the organization, which ranged from fundraising to data entry to on-field assistance during game days. Webb says when she started volunteering with the organization three years ago it was a welcome new adventure.

“I actually lost my job a couple of years ago,” Webb said. “I’m the type of person who has to be doing something. It helped me… and it also helped the kids. I do a lot of it because I get to see these kids who change, so it’s a lot of fun for me.”

Webb completed the rest of her volunteer hours through CWI and local SkillsUSA chapter activities such as Rake Up Nampa and free oil change events for military veterans. She will be honored for her volunteer service at the national SkillsUSA competition held in Louisville, Kentucky, June 22-26.

In addition to receiving the President’s Volunteer Service Award, Webb will also be competing in this year’s event—representing Idaho in the Prepared Speech category. She earned her second trip to compete at nationals after winning first-place at the state SkillsUSA conference earlier this spring.

SkillsUSA is a national, nonprofit organization that works to ensure America has a skilled workforce. SkillsUSA has more than 300,000 students and advisors who participate annually. Each year, nearly 6,000 students compete at the national level in 99 occupational and leadership skill areas. CWI has celebrated its share of success participating in SkillsUSA with students capturing nine top-10 finishes at nationals since 2010.

Watch the video to learn how CWI has impacted Lisa's life.