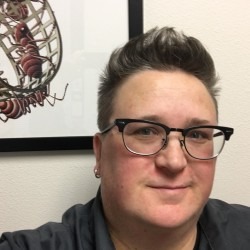 The main objective of cryptography, a field of study for both mathematicians and computer scientists, is to provide a way for two people (often characterized as Alice and Bob) to be able to send a message over an insecure channel in such a way that an opponent (often called Oscar) cannot understand the message if it is intercepted.  In some cases this is achieved by using previously agreed upon code words or symbols.  In others, it means that Alice and Bob have agreed upon a particular technique for disguising their message.  This technique is referred to as a cryptosystem.  One example of a simple cryptosystem is the shift cipher.  Each letter in the message is replaced with one a previously determined number of letters away.  For example, if Alice and Bob agreed to a shift of 4 and Alice needs to send Bob the message “Attack at dawn” she would actually send “EXXEGO EX HEAR”.  To make it a bit more challenging on Oscar she would probably remove the spaces in her message.   When Bob gets this message, he knows that he has to shift the letters in it back by 4 places.

The shift cipher is an example of a private key cryptosystem.  Its security is heavily dependent on keeping the type of system used and the exact key used a secret between Alice and Bob.  It also requires that at some point Alice and Bob agree on the key in a secure environment.  Sometimes, it’s important for Bob to be able to communicate with an Alice he’s never met or collaborated with before.  He has to assume that Oscar is always listening in so Bob might choose to use a type of system called public key cryptography.

Public Key cryptography used keys that have two parts:  a public half of the key that bob publishes for all to see (even Oscar) and a private half that he keeps to himself.  These two halves are generally numbers or sets of numbers that are based on very, very large prime numbers.  If Alice needs to send Bob a message, she converts her message into numbers (perhaps 1=a, 2=b, etc.) and performs the calculations specified by the information in Bob’s public half of the key.  She sends to new and improved message to Bob.  The calculations used by Alice are very difficult to reverse-engineer. Thus, if Oscar intercepts the message he cannot backtrack to the original message even though he knows what calculations AND which public key numbers Alice used.  The only way to get the original message back is to do a second set of different calculations using…you guessed it…that number that Bob keeps secret.

This public key cryptography concept can sound very complicated and many people assume that it uses extremely high level mathematics.  The reality, though, is that the two major components are quite simple and accessible for most students.  They are:

For more information on some simple ways of creating secret messages, check out the following links:

CWI will celebrate Indigenous Peoples’ Day on Oct. 10 with food and activities and a cultural presentation from a student who will share her own experience learning about her Indigenous roots. It is free and open to the public.

Oct. 3 – 7 is National Tutor Week. Go out of the way to say thank you to CWI Tutoring Services and Writing Center tutors, and let them know how much they are appreciated!

It’s Okay Not to Be Okay

To help students cope with and balance the stress of life, CWI Counseling and Wellness Services is offering a two-day event addressing important topics and providing information and resources surrounding mental health.

Find Out More About CWI Programs through Exploration Events

Are you interested in learning more about careers and programs to help you get the job you want? If so, plan to attend one of College of Western Idaho's (CWI) Program Exploration Events!

Learn about your transfer opportunities, and connect with various colleges and universities during College of Western Idaho's Transfer Fair, Oct. 11.

CWI’s campus garden aims to provide students access to fresh produce and support in their agriculture work. Each year, Farm to Fork raises funds to help support the garden and its mission.