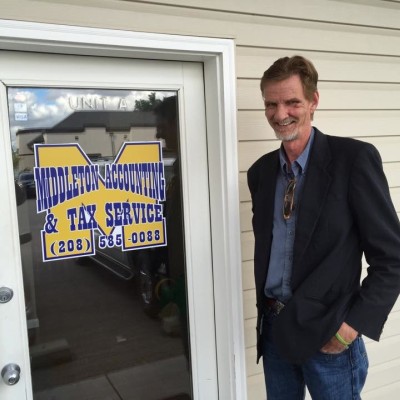 When Russ Keely stepped on CWI’s campus the summer semester of 2009, he was homeless, unemployed, couldn’t drive, divorced, dealing with sobriety, on probation, and penniless. “I was scared to flipping death when I stepped on campus. I wasn’t only unemployed, I was unemployable.”

Now, two years after graduation with a Business-General AA, “CWI took me from the lowest point of my life to a respectable life. Now I have a job, a car, my own place, and a life.”

Russ was angry at himself, afraid, and skeptical when he stepped into John Nordstrom’s Principles of Macroeconomics class that first summer. He had recently been released from incarceration where the TRiO program helped set him up with classes at CWI since he had no prospects for work. But Nordstrom and another one of his first instructors, Heather Schoenherr (formerly Heather Thompson), who taught his Introduction to Psychology course, started to put him at ease by showing him that he could still be a successful college student and more.  They also helped him get involved in student government, first as one of the original senators for ASCWI, and eventually as Treasurer.

Russ says, “CWI gave me a good environment for my sobriety. I learned how to make mistakes without relying on a drink.”

Not only were the people at CWI “normal,” but he felt a ton of encouragement from Nordstrom, Schoenherr, accounting instructor Joe Welker, and Alicia Petersen, enrollment specialist who worked with student government and clubs, that he hadn’t had before.  “I was treated well. They saw me as a person.” “They helped me stretch myself and see that I could do it.” Despite being born with only one arm, fighting for sobriety, and with a tough background, “I was a capable individual, not just a statistic.”

Joe Welker got Russ interested in taxes. Russ was in the first Income Tax (ACCT 250) class at CWI. Marianne Spencer, another CWI student, gave Russ his current job as a bookkeeper, tax preparer, and small business specialist at Middleton Accounting and Tax Service where he uses his advanced Excel skills. “I was completely illiterate with Excel when I started at CWI, but Dave Berggren set me straight. I now use it daily. I set up most of my clients in Excel rather than Quickbooks because I can make it sing and dance for everything but payroll. Business Statistics (BUSA 207 and 208) was the hardest class(es) I took at CWI.” Russ says that when it comes to his work, “Nobody can beat me on price.”

Looking back on his experience, he says “Two of the best things I’ve done: sobriety and CWI.”

Not only did CWI help him with his career, it is helping him continue to be a student at Boise State University, where he takes an occasional class toward a bachelor’s degree. Russ says, “It was a great stepping stone to get back to Boise State University. Thanks to my work at CWI I knew I could do it, and I was able to get rid of the academic probation I was on from back in 1980.”

At 54 now, Russ says that he had a “Midlife transformation instead of a midlife crisis.” After years of destroying his life, he is now proud of the life he has built for himself, but he knows that he couldn’t have done it by himself. When he was asked if he had one thing that he could tell the world about CWI, it was simple: “Thank you.”

Sophie Rusling, from the Isle of Man in the United Kingdom, is pursuing her passion for car restoration and customization in College of Western Idaho's Collision Repair Technology program.

College of Western Idaho celebrated its 2022 class of graduates, May 13, in a commencement ceremony held at ExtraMile Arena in Boise.

Congratulations to Class 11 of College of Western Idaho’s Law Enforcement program who were honored during a ceremony, May 11.