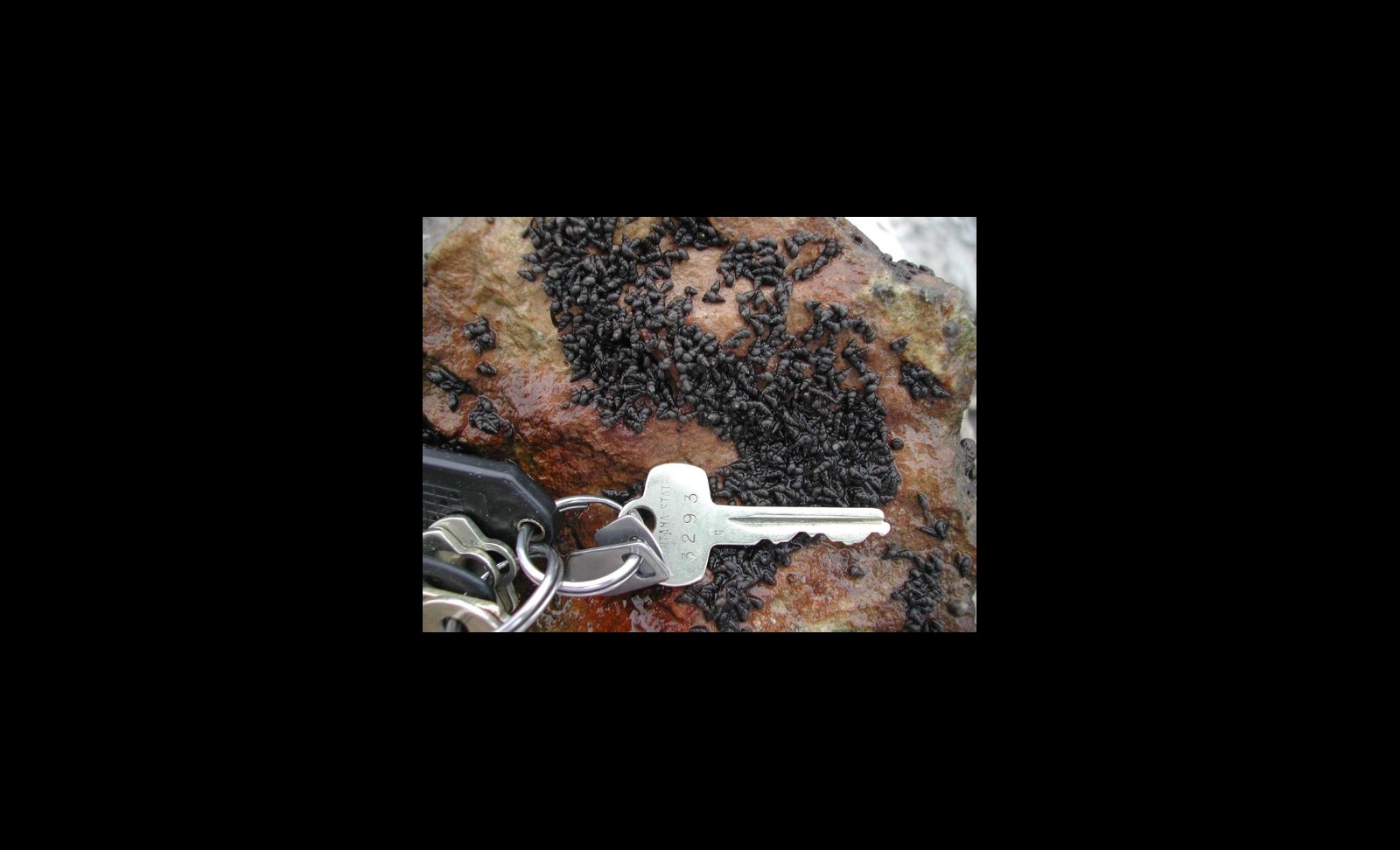 The research is investigating the distribution of an invasive freshwater mollusk in and around a travertine spring complex and stream in eastern Idaho. Travertine springs are those with very high concentrations of calcium carbonate, calcite, and aragonite; like those found in Yellowstone National Park. This spring, however, is cool so the mineral composition is mostly calcite and it does not create the elaborate terrace formations as in Yellowstone.

Potamopyrgus antipodarum, more commonly known as the New Zealand mudsnail, is the invasive mollusk in this eastern Idaho stream. The tiny animal competes with native invertebrate species for food and space and can be a real problem in some places. Idaho minnows and trout may eat the snails but, unlike other native invertebrates, they can pass through the fish unharmed.

The distribution of the snail caused the Idaho Department of Agriculture Invasive Species Coordinator – Tom Woolf – to think…the snail, he noticed, can be found above and below the point at which the travertine springs discharge water into the stream, but not in the spring themselves or in the stream directly influenced by spring waters. Woolf wondered why this was so? In cooperation with Professor Lysne and the Center for Invertebrate Science at CWI, Woolf designed a study to address the question. Last summer he collected about 30 small samples of water from above, within, and below the travertine spring complex. He also collected freshwater invertebrates at each of these sites. The water samples were sent off to the State of Idaho Research Laboratory for chemical analysis. The invertebrate samples came to CWI. This is where our students come in. Jennifer, Kassandra, and Tabor have spent the last four months sorting through the samples that Woolf collected to meticulously pick out every single animal. There are thousands and thousands of tiny invertebrate animals that will have to be identified by the team this spring.

“This is such a great experience for the students,” Lysne says. “Though their interests may not be invertebrate zoology, the process of data collection and analysis will serve these young scientists well as they continue their studies.” The questions in biology, or more generally in all fields of science, differ greatly but the process used to address them is very similar. These are skills that give CWI graduates an advantage over other students in the Treasure Valley when competing for new research opportunities or, ultimately, jobs. While the team has their work cut out for them, Lysne optimistically states that “they’ll get it done!”

Check back here for the results of their research later in the spring. The three will also be presenting at regional conferences in March and/or April. We’ll post this information when it becomes available. Go CWI Science!!