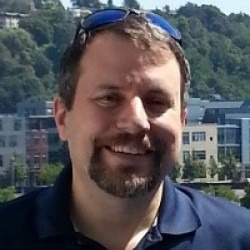 A few months ago a new movie came out about a woman, who on exposure to some blue drugs, was able to start using more than the 10% of her brain that the rest of us are stuck with.

Since when did people start using only 10% of their brains?  This is just one of the many persistent myths that have been bandied around by Hollywood and the general public.  The truth of the matter (and a slightly depressing truth it is) is that everyone uses 100% of their brains 100% of the time.  Blood flow to the brain remains fairly constant whether you are studying for your next test, watching Sponge-Bob Squarepants, or asleep.  It’s true that different activities will increase or decrease blood flow to certain regions of the brain, but overall blood flow is tightly controlled and usually around 750 ml/minute in adults.

Tests and logic show us that the 10% idea is mere myth.  First of all, fMRI – functional MRI – can show us in real time the flow of blood in the brain of living people.  Every healthy brain that has been looked at in this way has been very active over its entirety.  Secondly, if only 10% of the brain was in use, the other 90% could be injured with no consequences.  Sadly, any trauma to the brain results in damage and neurologic deficits.  Thirdly, the brain uses a tremendous amount of the body’s available energy and oxygen.  The human brain makes up about 2% of total body weight, but uses nearly 20% of available energy.  If humans didn’t use 90% of that massive energy hog, then natural selection would cause us to have smaller and smaller brains from generation to generation.  After all, why have an organ that does nothing but waste energy?

Lastly, scientists and doctors have spent decades mapping regions of the brain and figuring out what they do.  To date, there is no part of the brain that does nothing.  Every single region has been accounted for and usually has several jobs.  Even examining single neurons has shown us that they are all working.  There are no ‘silent’ neurons in the brain.

It would be fantastic if there was part of the brain we could unlock and do magical things with, but isn’t the brain a magical organ already?  The average brain has around 86 billion neurons.  Each neuron can make up to 1000 connections with other neurons, meaning there is something on the order of 86 trillion connections in the human brain.  But our brains are so much more than the sum of our synapses. Our brains allow us to laugh, cry, love, hate, paint, do math, compose music, and communicate to each other.  If that isn’t fundamentally magical, I don’t know what is.

Students and their guest(s) are invited to join College of Western Idaho at Majestic Cinemas all summer long for free movies and snacks.