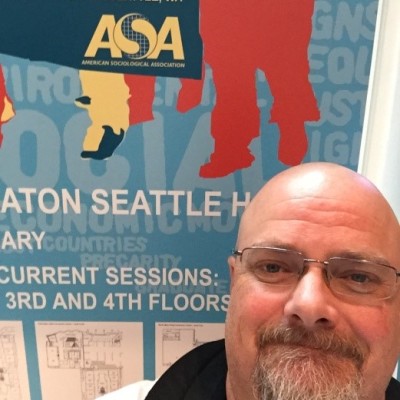 Charles Dickinson, associate professor of Sociology at College of Western Idaho (CWI), recently returned from the 111th annual meeting of the American Sociological Association (ASA) in Seattle, Washington. The national conference had over 5,000 attendees and contained more than 500 individual sessions as part of the program.  The conference provided a great opportunity for Dickinson to network with community college and university faculty from around the nation, attend more than a dozen sessions, and deepen his involvement at the ASA.

Dickinson, who served as Session Organizer, managed sessions within the Section on Teaching and Learning. He reviewed over twenty paper submissions, selected the ones to be included, and presided over one of the sessions. The papers included topics such as inter-disciplinary teaching, evaluating mentoring programs, and engaged learning models.

In addition, Dickinson met with the ASA Task Force on Community College Faculty in Sociology, which he has served on for the past four years. They conducted a national survey using a probability sample of sociology instructors at community colleges. A sample of that sort had never been drawn before; it included both full-time and part-time faculty. The task force is concluding their work this year, the final report will be presented to the ASA along with recommendations to support sociology faculty at community colleges throughout the United States.