Newly elected chairman C.A. “Skip” Smyser shares a laugh with trustee Mary Niland, Board Secretary and Treasurer, during a College of Western Idaho Board of Trustees meeting in Nampa on Tuesday, Nov. 27. 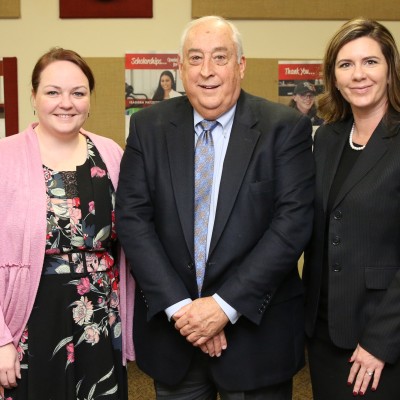 Smyser, who was elected to CWI’s Board of Trustees in November 2016, also welcomed two newly elected trustees in Molly Lenty and Annie Hightower. Lenty will replace retiring trustee Stan Bastian from Zone (2) while Hightower will take the seat formerly held by Emily Walton in Zone 4. Both Walton and Bastian did not run for re-election in November.

“It’s an honor to serve,” said Smyser. “I am a true believer in the mission of CWI and have seen what our students are doing. It truly is life-changing. I have said before, education is the key to this country and to Idaho.”

Smyser is a veteran attorney who served in both the House of Representatives and the Idaho Senate before devoting his career to representing companies and their advocacy interests full-time. Smyser is married to Melinda Smyser who currently serves as the Director of the Idaho Department of Labor and is a former state senator herself. They have four adult children and make their home in Parma, Canyon County, Idaho.

Outgoing chairman Mark Dunham of Boise was elected by the Trustees to serve as Vice-Chairman while fellow founding trustee Mary Niland will serve as Secretary and Treasurer.

The College was founded by a supermajority vote in Ada and Canyon Counties in May 2007. Currently, CWI offers more than 107 degree and certificate options for students seeking rewarding careers in many fields. Students pay $139 per credit, which has not changed in over three years due to the conservative fiscal stewardship of the College’s trustees and administration. Classes are available in Nampa, Boise, and online. To learn more visit cwi.edu .

In the News
Press Releases